Have you ever thought about doing Ride the Rockies? Maybe you’re concerned it won’t mesh well with racing? I thought it only appropriate to address these questions having done RTR six years in a row, including last year in the middle of my 21 race season. I also caught wind of a special opportunity (detailed at the end) if you want to do RTR this year. 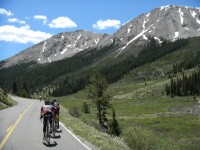 Getting dropped by the BMC Development Team up Independence Pass, RTR, 2012.

Ride the Rockies is what really got me into cycling. It always includes some of Colorado’s most scenic terrain on freshly swept roads, much of which you wouldn’t feel safe riding outside a patrolled event like this. Aid stations are plentiful and stocked with what you need and are likely craving. I always took full advantage of them and seldom felt stretched to the limit. There is a fun, engaging, almost party-like atmosphere through-out the entire week including energizing music and bountiful tasty food at the nightly community dinner. You will be hard pressed to ever meet so many nice, like-minded folks with whom a special kinship arises out of your mutual journey. You learn a ton at the afternoon workshops and often hear amazing and funny stories about training and racing from some of the most accomplished cyclists around.

All of that is great, but what really got me hooked was the personal challenge and progress I experienced. My goal the first year was just to pass more people than passed me. That motivated a lot of work, but also the discovery of that sort of Zen state you can find on long (semi) solo climbs… you know what I mean… right on the edge of suffering but in a grove that is oddly exhilarating. However, and perhaps most significantly, I was amazed and pleased at how I felt on the last day. Yes, I was ready for it to be over, but I could also feel how my body had adapted and how much stronger I felt than when I started. Multiply that feeling times 6 or 7 (days of the tour) and you are starting to understand why it sells out every year, mostly from riders that have done it several times before. Add to that the 40 pounds I’ve lost since I started cycling and the vast improvement I’ve experienced, and now you really understand my passion for it.

But what about racing? Won’t it fatigue me to the point of being counter-productive? There are certain aspects of that question I can’t answer because I didn’t have a power meter on my road bike last year (as I do now). However, I do think I can accurately say the answer lies in the details of how hard you ride RTR each day and the specifics of your race schedule. Last year I approached RTR as a way to return to my base training mid-season. My first A race was a week before RTR and my next A race wasn’t for another 9 weeks so base training was in my plan for that week. I rode only the first day of RTR at high intensity (it also happened to be the biggest day of climbing ever in RTR history… over 10,000 feet). I just rode where I was comfortable the remainder of days, in mostly zone 1 and 2. Perhaps it was from all the training and racing beforehand, but I had never felt as good during an RTR and I enjoyed it immensely. My only concern was that the last day of the RTR (Friday) included a significant amount of climbing, and I had the Guanella Pass Hill Climb two days later on Sunday. If I had been using a power meter I could tell you more definitively how my power output varied on that race from other one hour climbs, but I suspect it was actually quite favorable. My placing, while nothing to brag about, was pretty good for me on a longer hill climb – not my specialty, nor is it for just about anyone over 170 lbs.

I made the very difficult decision this year to pass on RTR, primarily because I’m focusing on the BRAC Road Cup Series and will likely race almost every weekend. Moreover, my training plan includes 3 A races each about eight weeks apart. Unfortunately, the RTR does not fall at a time that would be ideal for my return to base, where RTR is well suited. I suspect most coaches would not recommend 3 A race (peak periods) in one season because you need more recovery/build time before each peak. However, others say you can do it with 8 weeks between A races, especially if you’ve got a lot of miles in your legs, so I’m giving it a shot. It is highly unlikely I will ever dedicate the amount of time required for a serious run at the Road Cup again, so look for me to be doing the RTR again next year. How great would it be to have some teammates along!

Now for that special offer – a non-profit foundation called the Axel Project has been selected as a collaborative partner for the 2015 Ride the Rockies. As a result they have 5 guaranteed entries to this year’s event but the codes must be used by Feb, 28th. If you are interested and would like to bypass the lottery process, they are offering these spots for a $250 donation (plus the $495 entry fee). It’s a great cause and a Strider Sport bike is donated in your name to the child of your choice ($119 value), plus you will receive an Axel Project T-shirt ($20) and a Zoom! book ($10).

For more information on Ride the Rockies, as well as this year’s awesome route, check out – http://ridetherockies.com/

For more information on the Axel Project and this wonderful cause, check out – http://axelproject.com/