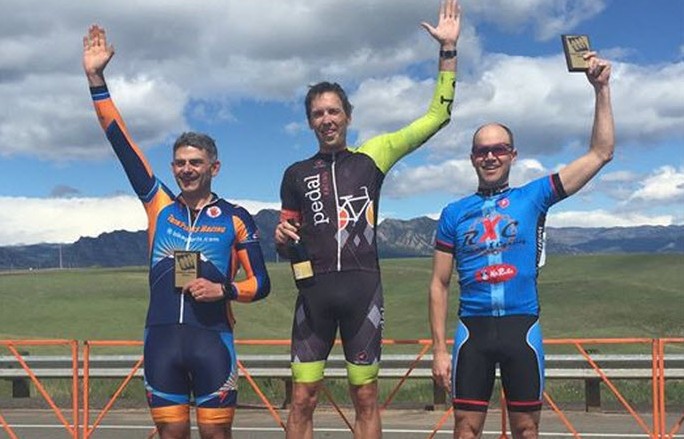 The following is Dan Schrad’s (obligatory) write up on his win at the Superior Morgul Classic – Morgul Bismark Road Race, MM40+ cat 4. As you might know, Dan is no stranger to the podium. However, such appearances have mostly been cross and MTB events that reward his amazing endurance, or a crit where he holds a break to win. They haven’t been road races like this one where a break rarely sticks. Therefore, Dan’s insight on what he has learned works and doesn’t in a road race is invaluable to anyone doing them. You should also know that his win here by over 12 seconds in a bunch finish like this is by road standards, a country mile.   – Chip

Another piece to the puzzle

Over the years, I’ve dabbled in almost every kind of bike racing and found each one to be unique and offer an aspect of the sport that another doesn’t. I love mountain bike racing; just going as hard as you can for as long as you can, and never giving up. Spit, dirt, blood. I love cyclocross; going absolutely cross-eyed hard for a short time, and figuring out how to do highly-skilled actions in poor conditions while you’re redlined. Road cycling started for me as a way to train for the other two disciplines – to get miles in quickly and train specifically for certain weaknesses. I’ve loved watching the grand tours and one-day classics – the team strategy, the brutal courses, the striking backdrops. But racing road has always been personally very hard for me to get my head around.

I found out pretty quickly last year in my first crit (Oredigger), that the cyclocross strategy – clip in as fast as possible and try to get holeshot, then hammer for the next 45 minutes – doesn’t work. The pack can catch you if they want to, or one guy who sits in while you’ve been busy beating yourself up will catch you. I’ve found out in the Cat 4 races that I’ve done this year that you can’t hammer at the front of the group and expect to have enough left for a sprint. This has been the hardest lesson for me. A race is supposed to be hard, right? That’s why we do it – to test ourselves, right? Road racing is about patience in relationship to effort. Testing yourself when you should, recognizing those moments, and balancing the reward with the consequences. A very different way of thinking from the “go hard, then harder” school of bike racing I’ve grown accustomed to. But consistent conversations with teammates and friends who have experience to share have started to sink in.

Superior Morgul was when that all clicked for me. I finally just calmed down and let things happen instead of trying to control it. I sat at the front of the group (stayed in the top 10) the entire race so I could see the front of the field and if anyone was trying to break away, and also avoiding any tangles that could happen further back in the pack. I kept my eye on a few of the guys I knew would be the most likely candidates to try a break. I didn’t do much pulling on the front at all. And I enjoyed the scenery – the Superior Morgul course is really one of the most beautiful rides (much less races) that are out there. I chatted with a few in the pack during the first two laps about how “gentlemanly” the pace was, and how perfect the weather was.

The last lap was a little sharper. The intensity definitely picked up and heads were on a swivel as we made our way around the backside of the course. We went up the second to last climb, and the pace was hard. The pack was getting reduced, and you could start to see who was feeling good. I marked 2 guys that I thought had the legs for the finish. We descended from there and headed to the last climb – The Wall. There’s plenty out there about how hard this climb is, and it lives up to the hype. The finish line sits right on top, and as soon as you roll up to the foot of the climb, the whole thing unfolds before you. It’s almost more mentally daunting than physically for that reason – it’s a visual monolith more than it is just a steep climb.

A small group of 4 or 5 did most of the pulling to the base of the climb. I sat right behind them when the pitch turned up. The pace was high, but nobody attacked for the first minute or so. Then one came from behind me and put in a good dig to get a gap – maybe 15 meters or so. Everyone looked around but nobody followed. The pace sharpened a little more, and the leader was just dangling off the front for a few more pedal strokes. The field had spread out about 6 wide, and I was toward the inside sitting on a wheel as we approached the steeper grades. I got into the drops, shifted down a gear and went as hard as I could. I caught the leader and went by, standing up and grinding away at both my teeth and my gears. The finish was close, and I was getting tired, but I just kept my head down until I heard a spectator say, “you better post up, you got it!”. So I did as I rolled across the line, then collapsed on my bars.

So what did I learn from the race? I learned that I can’t really tell how I’m going to feel at the end of the race until just before the end of the race, and constantly asking myself “do I feel good or bad” as the race is happening doesn’t help much. Road racing tends to get in my head more, and I need to keep it simple. I’ve also learned to take rest and nutrition much more seriously in order to prepare for a race. I go to bed early. I eat stuff that doesn’t make me feel bad. I learned that while I was lucky to come across the line first, everyone at the top of the climb was just as happy as I was. I learned that when I come home with a bottle of wine, my wife is happier about bicycle racing.

The one thing I know for sure is that a day spent racing bicycles with friends and teammates in the amazing state of Colorado is a win, regardless of placing. So thanks to the team, the race organizers, sponsors, etc. for making these kinds of experiences possible.